I have a few Kenwood Commercial Rigs that would be using the RJ-45 split cable.

I have properly home brewed the cable using a old Network cable, The TRRS from a Blackberry Circa 2008 headphone and TRS from a stereo cable.

Current status is that on Winlink Vara HF it receive properly but cant seem to change the COM5 (IC7200 normally) to COM3 to trigger the PTT. Maybe an RF, Winlink COM port allocation, or Slow PC problem.
While in JS8Call it PTT perfectly but the specific ASUS Eeepc can’t seem to keep up with the decode on JS8Call in Windows 10. (Not a new problem)

I’ll plug it into a normal Windows 10 PC and report back tomorrow. 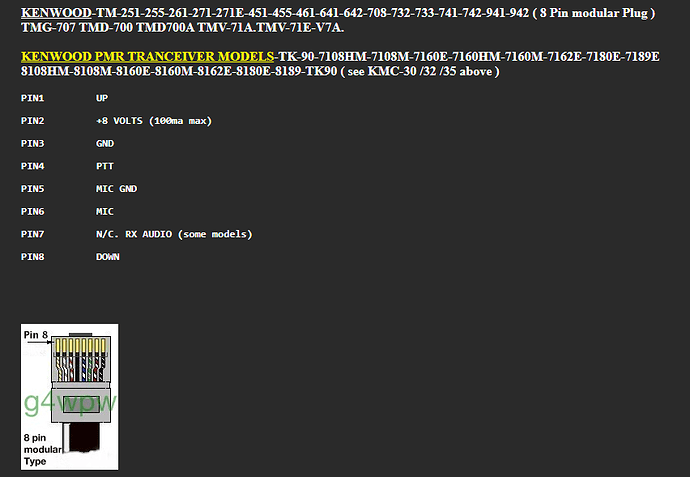 Using the below drawing from Denis @K0TX (Thanks!) exactly, just changing the Pin out. To the above on the RJ-45 for Kenwood PMR Models. 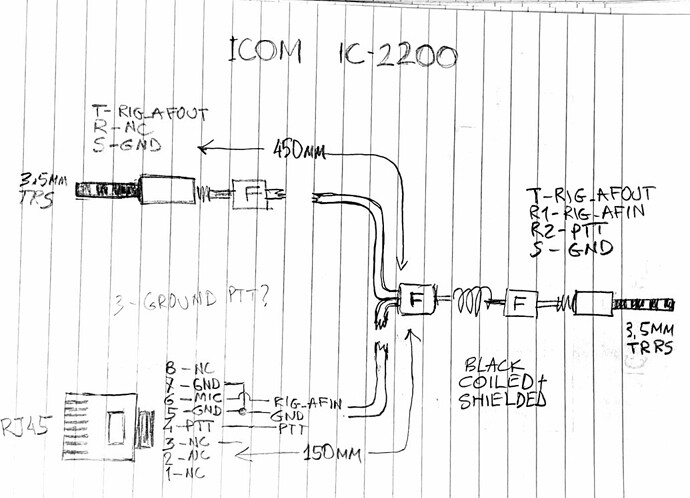 Note that the RJ-45 pin out is different for Kenwood compared to ICOM both in location and direction of pin numbers it seems!

As well as it works, there are 2 challenges.

I have only tested on the TK-90.
Will rig up the other models and give feedback.
Should work for all the models in the list from @G4WPW

re #1: with sensitivity at 5% and still overdriving, go ahead with the attenuator activation. You can always disable it again by bridging the solder jumper.

re #2: there is PTT setting in VaraHF, let’s check it:

@K0TX Denis thank you for the feedback and suggestions,
I sorted all the gremlins out last night and interesting discoveries.

re #1 Connected the TX500 logic DigiRig to the TK-90 initially (not paying attention but it should not make a difference.) I guess and found that the 20db Attenuation was not bridged. I quickly opened the rest of the standard DigiRigs and found that none of them had the 20db attenuation bridged. Anyway using the Normal one with the attenuation open works extremely well. Now deliver 50db in JS8Call. I prefer 40db, interestingly it delivers between 49 and 52 db on every band between 40 and 10m Very nice as no adjustment between bands is required for receive. Solved.

re #2 in Winlink, I have found that my computer seems to struggle to switch between COM ports if the PC was started with one and moved over to another on the fly. To solve the problem, plug the old USB sound device out shut it down, reboot and then plug the new one in. Not sure if this is a specific PC issue or a Winlink issue.

Over the weekend I will pull some PMR VHF units out of the truck and see if the setup works with it.