Audio Issues With Baofeng Cable and VARA FM (for Winlink)

Hello! I purchased and received my first Digirig kit for the FT-891, and was able to set it up to do wsjtx modes, js8call, and winlink (Vara HF) just fine, using the FT-8xx cable. So, I purchased the Baofeng (kenwood style) cable sets in hopes to use it to do Winlink with my baofeng and radioddity GA-510 radios, using Vara FM. I am not having any success getting it to communicate with my other, working VaraFM/Winlink/FT-991A setup. I also tried this evening with a friend who was having similar issues. I don’t seem to have a driver issue, PTT works, etc - but i’m not able to make a connection in a Vara FM Peer-to-Peer session - and I don’t have any nodes close enough to try a regular winlink session. I have studied the following articles and posts [EDIT - i’m a new user so can only put 2 links in - but I have read more. I will reply with the others]: 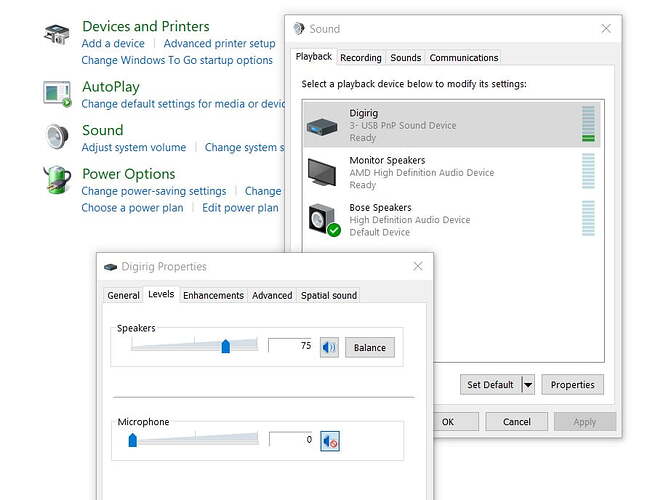 One of the final touches required for enjoying digital modes is setting up the audio levels. There are multiple controls hidden in different places so the process might be somewhat difficult the fi…

I feel like there must be something I’m missing. But I have tried two different radios, on two different computers, with the same result, so I don’t know what I could be missing…

Any thoughts or advice would be greatly appreciated.

Here are the other two articles I’ve studied and tried:

Getting Started with Digirig Mobile

Maybe you read the manuals cover-to-cover, maybe you spend all day trying every possible option before reluctantly opening the documentation. Regardless, if you are a first time owner of a Digirig …

I bought a Digirig combination from GigaParts marketed specifically for Baofeng HT, which I already got working very well on SignaLink, but wanted to pursue a Digirig solution which seems to consume less power. Trouble from the start. Black cable was connected to Audio port and a USB Silicon Labs driver was installed for a Windows 10 Com port. The VaraFM PTT was set to Com 3 and the RTS box was checked. Has ANYONE ever got this working on VaraFM? It will transmit a burst of data for a ping …

If you can hear each side on the opposite end then the issue is likely with levels - usually overdriving that causes the distortions. I would suggest starting with very low levels and increasing as needed.

If you keep having difficulties, please post a video walkthrough of the setup and connection attempts and we’ll check it out.

Thank you so much for your reply. I will check levels again everywhere I know to check, and I will make a video walkthrough, probably tomorrow. Thanks again!!

I went back through and made sure all the levels were as low as I could get them, and all the special features like AGC, Bass Boost, Spatial sound, etc… were off. Here are two videos… the first is trying to transmit from the digirig station to the FT-991a station, and the second is the reverse. 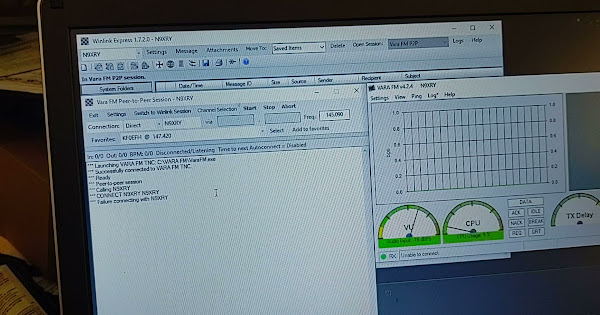 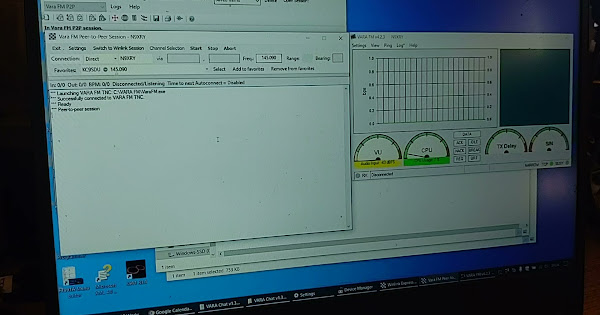 Let me know what you think. This is the same behavior over two different computers and two different radios. Also, can you describe the hardware attenuator you’re talking about? Is this a DIY electronics thing or something I can purchase? I’m afraid i’m not the brightest with electronics

Thanks and let me know if you have any trouble with the video links. 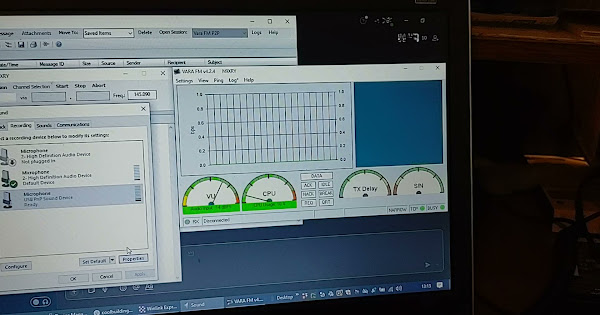 That sounds unusual. Is 991A set to FM?
Without making any changes to the radio, try a voice QSO and see if readable.

Well now I feel silly. The 991a was set to Data-USB, not FM. However, now, when I try to transmit to the DR station, nothing is heard… I changed to “Data-FM” But the “FM PKT Port Select” was set to DATA instead of USB on the 991a. I believe the 991a station is sorted now. The two can now “connect” both ways, but the connection is dropped before any further data is transmitted: 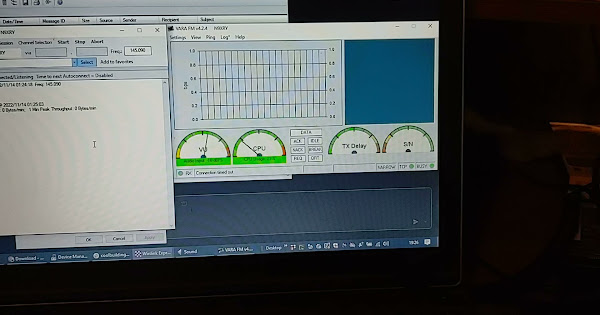 Seems like we may be back to the levels problem? The way the VU spikes after each Tx is strange.

Can you make a voice QSO between the two stations?

If I change the mode of the 991a to FM, rather than FM Data, then yes I can, both ways.

However, there is no signal transmitted out of the 991a when using VARA FM in FM mode, only in FM Data mode, where the port is set to USB (Universal Serial Bus, not Upper Side Band hahaha), rather than DATA.

Also, to test a voice QSO from the digirig station, I have to unplug the digirig from the radio - is this what you meant for me to do?

Yes, that’s what I meant.
Those green dots on baofeng screen looked healthy. I also see 991 blinking ACK which I suppose means acknowledgement. At this point the issue may be in something on the application layer of the connection. No payload?

Do you have any other stations you can try?

Unfortunately, I do not. I live way out in the country, out of range of any digipeaters or peers within 2m FM.

No idea if this information helps any, but here are the results of the Auto-tune test and Ping test in VARA FM from the 991a station to the digirig station: 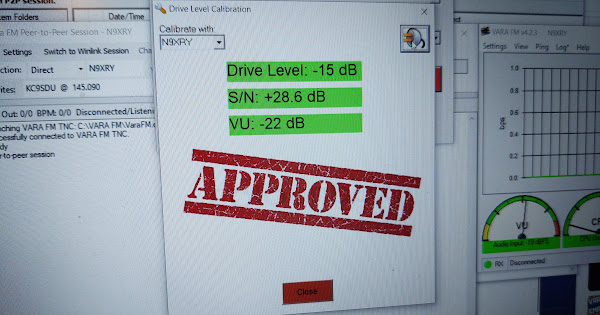 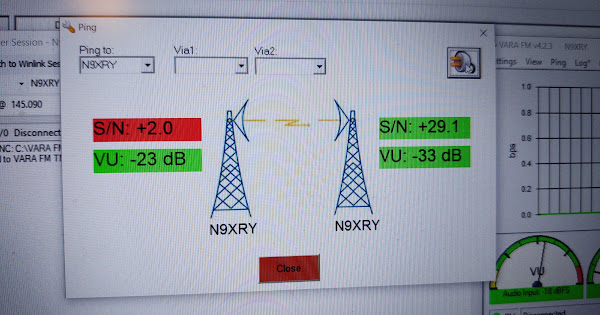 Both tests from the digirig station produce “No Signal”

Understood.
Can you monitor received audio on 991 when Baofeng transmits during the failing tests? Does it sound similar to what you get on Baofeng in opposite direction during the passing test?

Hold the phone! I just switched out radios… I’ve been primarily testing with the radioddity GA-510, and I just hooked the Baofeng up instead on a whim. I had been testing with both, but for some reason this time it’s working both ways with the Baofeng! Wow. I better take pictures of all the settings now so I can duplicate…

Honestly, I think the trouble all along was the Radioddity GA-510. Apparently it doesn’t want to play digital. When I was swapping it out with the Baofeng was when I was still having trouble with my settings on the 991a station, so it wasn’t going to work with either.

Thank you so much for your patience, and working with me on this! I’m going to buy your new Yaesu cable for my FT-2980R too

(just saw it came out today!)

The radio doesn’t know it is playing digital. It is just handling audio from/to digirig. There may be some level setting or maybe FM wide/narrow that messes it up on one of the HTs.

Anyway, happy to help with the troubleshooting.

Hahaha I know it doesn’t. But it’s a fact that when I swapped them out, the baofeng started working with everything else the same! I’ll check settings on the GA-510, but I’m happy

Have a good night!