Is M17 support something that is possible for digirig?

What is the full model name of the transceiver?

I have a couple HTs (most recently VX-6R), but would be interested in others as well. I just haven’t seen much about digirig supporting M17.

Ah, found the project website. Initially I thought you are talking about some transceiver model I never heard about.

Looks like a new digital mode. This should be possible to use with Digirig. I’ll read up some more and will reach out to the lead developer.

Here’s the reply from the lead developer of M17 Wojciech Kaczmarski:

Hardware-side this should be M17 capable. Keep in mind that M17 has been designed to work on the VHF band and above, not on HF. That eliminates some rigs right away. I’m sure you could reuse some code of the mvoice application (it runs on Linux only AFAIK). There is also my own C implementation of the full RF stack.

I have my project pipeline full for now, but if anybody decides to give this a try please post your results here.

Thanks for all the responses!

@K0TX I’m aware it’s designed for VHF, but the support for radios right now is lacking. I stumbled upon digirig looking for a way to give support to some of my existing equipment.

I’m really, really interested in digital, but think it’s terrible that most of the protocols we currently have are tied to patent or licensing problems. M17 is one of the first VHF/UHF protocols I’ve seen that seems to be open from the ground-up. M17 seems to be more in the spirit of what ham radio is about

Just as a follow-up. I also have very little time right now, but might be able to contribute down the road. Digirig looks really neat!

Another update from nice folks at M17 project:

Paulo PU4THZ is already working on the piece of software needed to use M17 with your Digirig hardware.

It should soon have selectable UART and audio interfaces for the PTT and baseband handling.

This would be fantastic news!

With the right PC/Linux tools, you could talk over the internet, and then with Digirig you would be able to talk over RF in M17 Codec2…

That’s exactly what I was thinking. The current M17 radios don’t really meet my requirements yet (I‘d buy several weatherproof M17 radios in a heartbeat if anyone is listening), but I have a bunch of FM radios lying around.

Thanks for these updates.

*The last two need to be modded and reflashed to support M17.

@SP5WWP thanks for the clarification!

I’ve been holding off buying digital due to all the vendor lock-in thus far.

First with the M17-mod-gui app + digirig + 2 baofengs. M17 won’t work with them, this was just to see if the ptt would activate and the baseband would be transmitted. First Test

Thanks for those detailed tests.

A strong point of Vara mode is that it can accomodate Baofeng HT with narrow mode and can drop to a very low rate under poor signal conditions. I don’t know much about M17.

M17 standard and any accompanying hardware are all released under GPL/TAPR licenses. Everything is absolutely free to use and not a single component of it is proprietary. VARA isn’t.

I agree GPL/TAPR is a strength of M17 and other open modes. Thanks for pointing that out.

I have just received my DigiRig, literally a few moments ago. I did a quick test with m17-tools and my Yaesu FTM-6000. Results below. 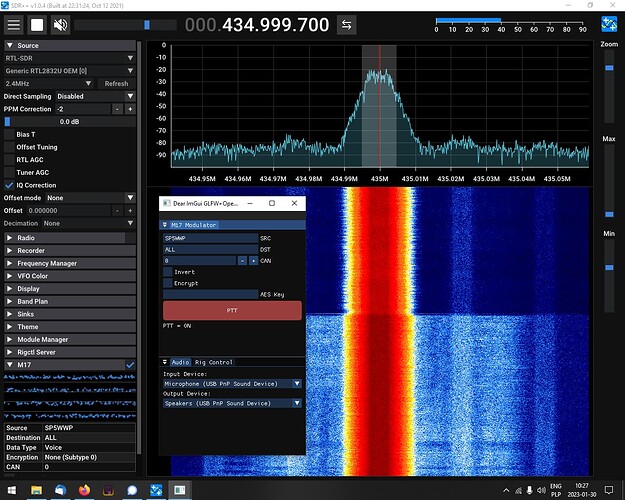 This is good news. Thanks for reporting this! I suppose you are running with PKT.SPD set to 9600. Is that right? Any other special configurations in the radio?